ST. LOUIS — Depending on your perspective, Republican Governor Mike Parson is positioned well in a ‘red’ state to hang on to his office or Democratic State Auditor Nicole Galloway has made the race for governor closer than many expected.

Parson has a long history of serving in public office but was never elected to the job he has now. Parson took over as Missouri’s Governor in 2018 from his position as Lieutenant Governor when former Republican Governor Eric Greitens resigned.

Parson represented Missouri’s District 28 in the State Senate from 2011 to 2017. Prior to that, he was a state representative from 2005 to 2011. He served as Polk County Sheriff for more than a decade.

Galloway was appointed state auditor in 2015 and won the election for the office in 2018. She is currently the only statewide elected Democrat in Missouri.

“The money pouring into this race reflects its growing competitiveness. The RGA helps fund the Uniting Missouri PAC, which is bolstering Parson, and through Election Day so far, they’ve already reserved $12 million in ads, with $6.3 million already spent. Their ads have worked to paint Galloway as “soft on crime” and argues her campaign is being bankrolled by those supporting defunding the police, even though Galloway herself doesn’t hold that position. The “law and order” message is one they hope has particular resonance here given that Parson served for 12 years as the Sheriff of Polk County. Other ads superimpose Galloway’s image with Nancy Pelosi, Bernie Sanders and Elizabeth Warren. The DGA, via the A Stronger Missouri PAC, have reserved at least $5 million through Election Day and has already spent $2.3 million, while Galloway herself has reserved over $2.9 million.

Parson doesn’t have many of the traditional benefits an incumbent may have since he wasn’t elected to the top job himself, and Democrats are honing in on his long career in the legislature, with their latest ad claiming he treated his job as the “show me the money state” for taking money from lobbyists. The message that could have the most resonance is his actions on COVID …”

Prior to COVID-19, Parson’s campaign touted “record lows in unemployment” and “the largest income tax cut in Missouri history” as some of his economic accomplishments.

More than seven months into the pandemic, Parson said Missouri is recovering better than most states and recently released previously withheld state funding for education and other services.

“Missouri recently scored the highest in the nation in the business condition index, which measures employer confidence in the economy over the next three to six months,” Parson said in an early October press briefing.

But, Galloway is trying to make the case to voters that Parson is “in over his head.”

In their only debate so far this election, Galloway said, “On our biggest challenges, Governor Parson’s solutions are just too small. If he had answers we would have seen them already.”

RELATED: Voter Guide 2020: Everything you need to know about the election in Missouri and Illinois

RELATED: Missouri Amendment 1: What to know before voting 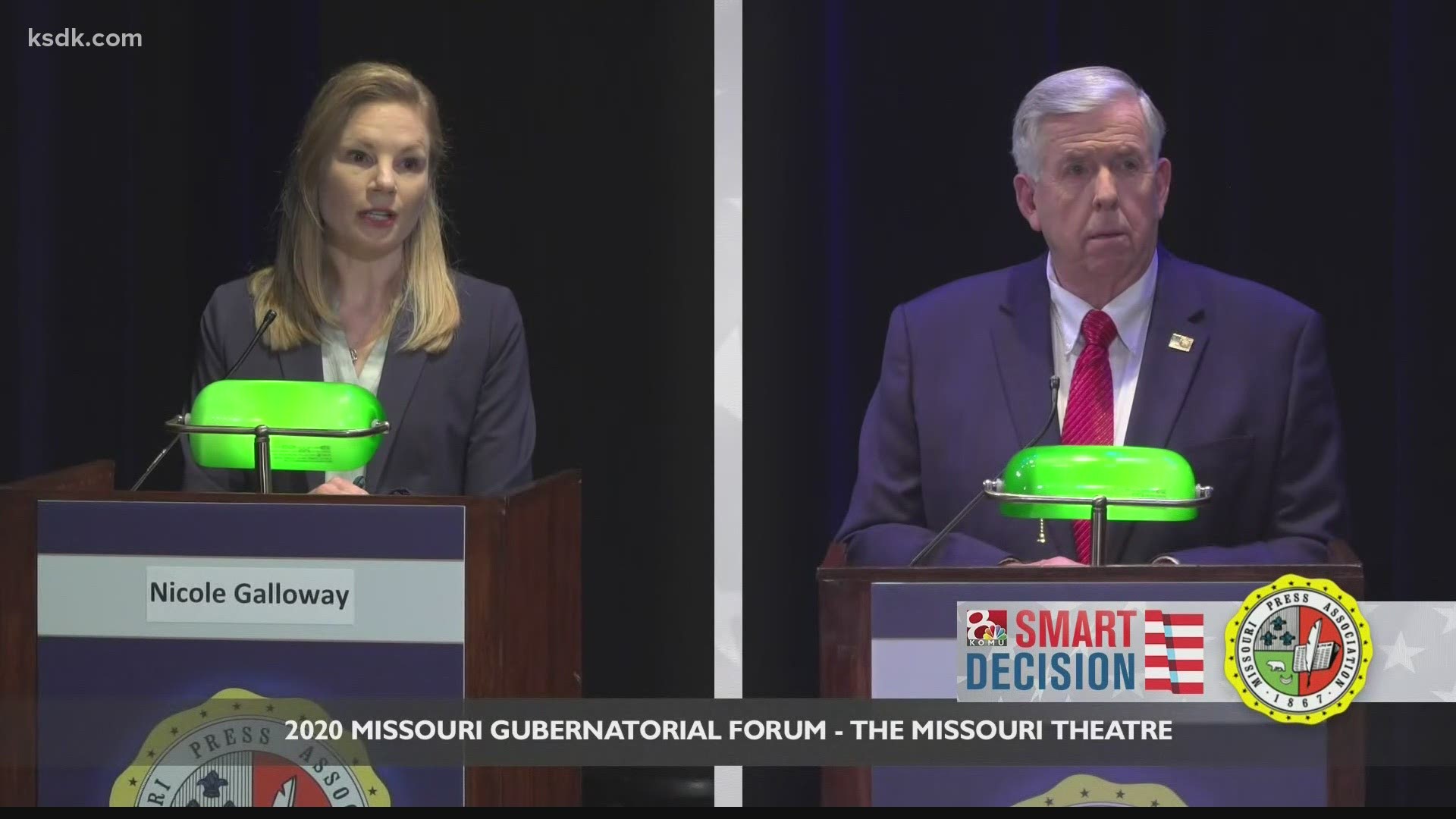