The fire tower you can climb at Roaring River State Park once was a heckuva lot taller.

“That tower was built by the CCC (Civilian Conservation Corps) in the 1930s,” says Bob Frakes. “At some point the top half was taken off and it’s more of an observation platform now. When they built it they cleared the trees around it, but the trees have now grown up so much you’re actually in the canopy and can’t see above the trees.”

The metal Roaring River structure is one of the hundreds of Missouri fire towers and lookouts — think tiny platform atop a live tree or wooden pole — that Frakes documents in his new book, “Remembering Missouri’s Lookout Towers: A Place Above The Trees.”

Past coverage:Fire towers keep watchful eye over Missouri forests 80 years after being built 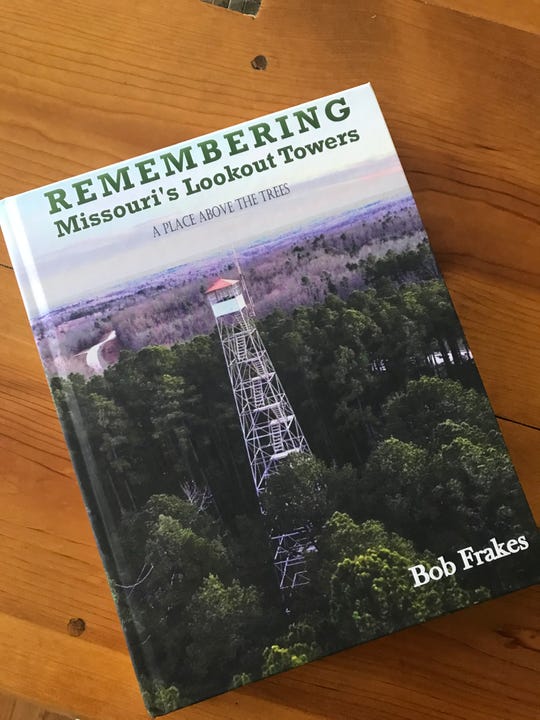 It took him three years to put decades worth of accumulated photos, maps and histories of fire towers into a hardcover, 255-page book. It’s available for $29.95 at wordsmatterpublishing.com.

Frakes, a retired public school teacher and historian, said he developed a fascination with Missouri’s fire towers at a very young age. He remembers a trip up the Mud Lick Mounded tower — still standing — when he was 5 or 6 years old.

“I climbed part of the way up. I didn’t get all the way to the top,” Frakes said. “Once I got above the trees I could feel this nice, cool breeze. I still remember that.”

Back in the 1930s fire towers were extensively used in Missouri to locate forest fires quickly, before they burned too much precious timber. Through the decades, many towers were open to the public to climb, and there are still a few today where folks without a fear of heights can ascend narrow steps to get an expansive view of the forest.

The stairs to the top of a fire watch tower in the Hercules Glades Wilderness Area on Friday, Nov. 9, 2018. (Photo: Nathan Papes/News-Leader)

More: Fire towers still in use, have long history in Missouri

Frakes worked with a fellow fire tower fan to develop a map of known towers, with GPS coordinates, some of their history and whether they can be climbed. The interactive map is accessible online.

“No Forest Service towers are currently climbable,” he notes. “The ones on the map in green are, to the best of my knowledge.”

The development of galvanized coatings for steel gave many Missouri fire towers a long and durable life. Frakes said the tallest was Goodman Lookout near Goodman, Missouri, at 120 feet. It took 160 steps to reach the top.

The oldest steel tower still standing today is an 85-footer built in 1927 near the town of Ellington.

“It’s a testament to galvanized steel that it’s really tough and strong,” Frakes said. “You can still climb it.”

Among the more unusual fire towers is the 72-foot Taum Sauk Lookout Tower built in 1949.

Missouri’s tallest fire tower was this 120-footer steel tower near Goodman, seen here under construction to replace the wooden tower to its right. (Photo: Joplin Globe)

“It was an example of fire towers from out West that had living quarters on them,” Frakes said. “You might be three or four hours from any town, so they lived right there.”

At its peak, some 300 fire towers and lookouts spread around the state. Today, Frakes said there are 60 towers still standing. Ten are on Forest Service land and 50 are on Missouri Department of Conservation property.

MDC still sends a fire spotter to the top of some towers, like the one at Hercules Glade Wilderness Area, when weather conditions are ripe for dangerous fires to break out.

Frakes said he wanted to document the fire tower history in Missouri with a nod to all the forest service and conservation department folks who spent a lot of time keeping watch over the state’s forests.

Wed Sep 30 , 2020
MARYLAND HEIGHTS, Mo. — The family of a man who died at a Dave Matthews Band concert last year recently filed a wrongful death lawsuit. On May 15, 2019, Darcy Smith and her husband Jasen Smith were at the Dave Mathews Band concert with friends at Hollywood Casino Amphitheater. After […]