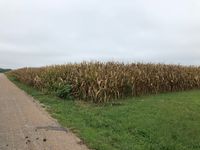 JEFFERSON CITY – Mid-Missouri farmers are hopeful increased yields and recovering prices will result in a better than expected fall harvest.

“This is certainly a better outlook than what we were expecting,” Fischer said.

The United States Department of Agriculture’s crop production forecast for August predicted Missouri’s corn and soybean harvests to increase from 2019.

“I’m surprised at some of the yield estimates that I’ve seen,” Fischer said. “I find it hard to believe they’re going to be as good as they say they are.”

Rain falling at vital times has been a large reason for the high yield farmers have seen across the state.

Fischer grows corn and soybeans on his farm. He said he was satisfied with his good crop after flooding took out all of his production last year.

This year, yield checks estimated Fischer’s output at over 200 bushels per acre.

“You never know until it’s in the bin,” Fischer said. “We’ve still got a ways to go to get through harvest.”

The price of corn has fluctuated throughout the year. Iowa’s derecho windstorm in August resulted in a loss of about 10 million acres of crops.

The price and production impact from the derecho will be released in a USDA report on Friday, Sept. 11.

Fischer said a larger factor in the price was the recent trade developments between the U.S. and China. He said the international commodity trade boosted the price of corn by about 40 cents per bushel over the past three weeks.

“We’re still below the cost of production,” Fischer said. “But at least we’re still 40 or 50 cents better than we thought we were going to be.”

Further information on grain production and prices can be found for all 50 states on the USDA website.

Wed Sep 9 , 2020
“I have a 1-year-old baby … I just can’t imagine if we were in the house,” the homeowner said, holding back tears. “I had no idea the magnitude of what happened.” ST. LOUIS — Firefighters sifted through what was left behind after a house exploded late Tuesday night. St. Louis […]