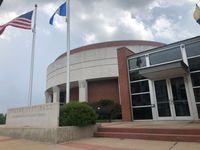 “We felt the need to call a special session, expedite this a quickly as possible and decide whether we want to do a mask ordinance or not or some other direction,” Fulton mayor Lowe Cannell said.

Fulton City Council reiterated that there was miscommunication initially and they would not vote on Tuesday night. Although they didn’t vote, council members recommended that the city of Fulton wears masks at this time.

Fulton residents had the opportunity to speak for or against the possible ordinance.

Fourteen residents spoke out during the first hour for public comment. Seven were for the ordinance and seven were against.

Bill Guinee, a professor at Westminster College, said the city has to act now.

“If we don’t come up with such a rule, then the next time somebody dies we have to ask whether we are complicit in his or her death,” Guinee said. “We have a responsibility, in this case, that the tiny right of not having to cover up my face, is easily trumped by my responsibility not to kill anyone.&rdquo;

Not all residents agreed on the issue. Some opposed it strongly.

“Have you thought about the people around this town that work ten hour shifts,” Anna Dryer-Khoilan, a Fulton resident, said. “This is America. How can enforcing socialism on our town with masks give a choice. From the words of a wise man,&rsquo;Let&rsquo;s make America great again.&rsquo; Thank you.”

She spoke a previous city council meeting, and plans to speak again during Tuesday’s meeting.

The meeting in Fulton began at 6 p.m.

“Even if it’s just a strong recommendation if thats all we can hope for,” said Snyder. “That there’s some type of leadership wearing masks and recommending it maybe the tide will turn and more people will do it.”

Snyder already requires face coverings in her store, but said that’s not the case for everyone.

“I’ve talked to city council members, lots of people in the community, and even some other small business owners who’ve said ‘Look I’m not going to require one in my business,'” Snyder said. “I understand that 100% but I also think it’s not trying to take away your liberties &mdash;it’s just trying to care for your fellow man.”

“For all our businesses we’re concerned about keeping them open and making their customers feel safe,” Cannell said.&nbsp;

The City Council of Fulton ends the meeting. As expected, no mask ordinance was voted on tonight. However, council members strongly recommended that the City of Fulton wear masks, even though it’s not required. @KOMUnews

If the council decides to enact an ordinance, it could take up to three weeks to be enforced.

This story has been updated by KOMU 8 to reflect current information.

Wed Jul 22 , 2020
[ad_1] Maxwell has been charged with recruiting and grooming girls for Jeffrey Epstein to sexually abuse. When asked by a reporter Tuesday about Ghislaine Maxwell, the woman indicted for allegedly grooming sexual abuse victims of Jeffrey Epstein, President Donald Trump said he didn’t know much about the case but wanted […]