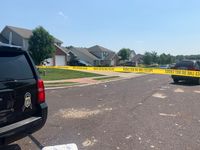 The two victims who died were Tara Knedler, 38, and Ri’ajauhna, 11. Ri’ajauhna’s last name was not released by CPD at the family’s request.&nbsp;

Jones said it was indescribable to sum up Sunday morning’s incident.&nbsp;

“There is nothing that can prepare you for that,” Jones said. “We owe it to them. We owe it to all of these kids who grow up in this community and others to prevent this where we can, to find other resources, to find justice where we can &mdash; whatever that looks like.”&nbsp;

The incident happened at about 12:15 a.m. Sunday morning on Volunteer Drive near Grace Lane. Officers on the scene found four victims with gunshot wounds.&nbsp;

Medics staged while at the scene, which Jones described as parking outside the scene until it is deemed stable.&nbsp;

“They did not, according to the information I have, believe that it was stable enough to enter the scene,” Jones said. “So, officers were giving trauma care at the scene and providing CPR and we carry trauma kits.”&nbsp;

A fifth victim was later interviewed at the police department, according to CPD.&nbsp;

“This was an incident of senseless gun violence,&rdquo; Jones said.&nbsp;

At around 11 Sunday morning, KOMU 8 News had reporters on the scene of the shooting who reported the crime scene investigation was still active.

Reporters described multiple homes blocked off by crime scene tape. Jones at the conference said CPD could not confirm at the time what led up to the shots fired.&nbsp;

At the time of the press conference, CPD had one suspect in custody. Jones said that CPD has talked to another suspect, but has not yet been arrested.&nbsp;&nbsp;

“We know that there were at least two people who fired guns,” Jones said. “We have to evaluate the circumstances by which those guns were used to see if they were criminal in nature.”&nbsp;

KOMU 8 News asked Jones why the suspect in custody has not been named. He said CPD is still talking to witnesses.&nbsp;

During the police conference, Jones called upon the community to reach out and make a difference.&nbsp;

“I think that this brings home that we all have a responsibility and we all need to try a little harder,” Jones said.&nbsp;

This is a developing story. KOMU 8 will provide more updates as they become available.&nbsp;

Sun Jul 5 , 2020
[ad_1] COLUMBIA, Mo. — An 11-year-old girl and 38-year-old woman died and three other people were injured in a weekend shooting in Columbia, Missouri, police said. Columbia Police Chief Geoff Jones said the shooting happened around 12:15 a.m. Sunday in a neighborhood where people were lighting off fireworks. Police did […]