As Ferguson’s 8 p.m. curfew passed Sunday evening, protesters remained on and along South Florissant Road near the Ferguson police station, but stayed peaceful

ST. LOUIS — Protests in the St. Louis area continued for a second day in response to the killing of George Floyd by a Minneapolis police officer.

Groups of protesters gathered in at the Madison County Courthouse and outside the Ferguson Police Department Sunday evening.

Crowds gathered in Madison County at around 4:30 p.m. and remained on the sidewalk in front of the courthouse for several. Many carried signs calling for the end to police violence.

In Ferguson, the crowds began to build near the police department along South Florissant Road at around 6 p.m. After chanting rallying cries like “Black lives matter” and “What’s his name? George Floyd,” protesters began marching down South Florissant. 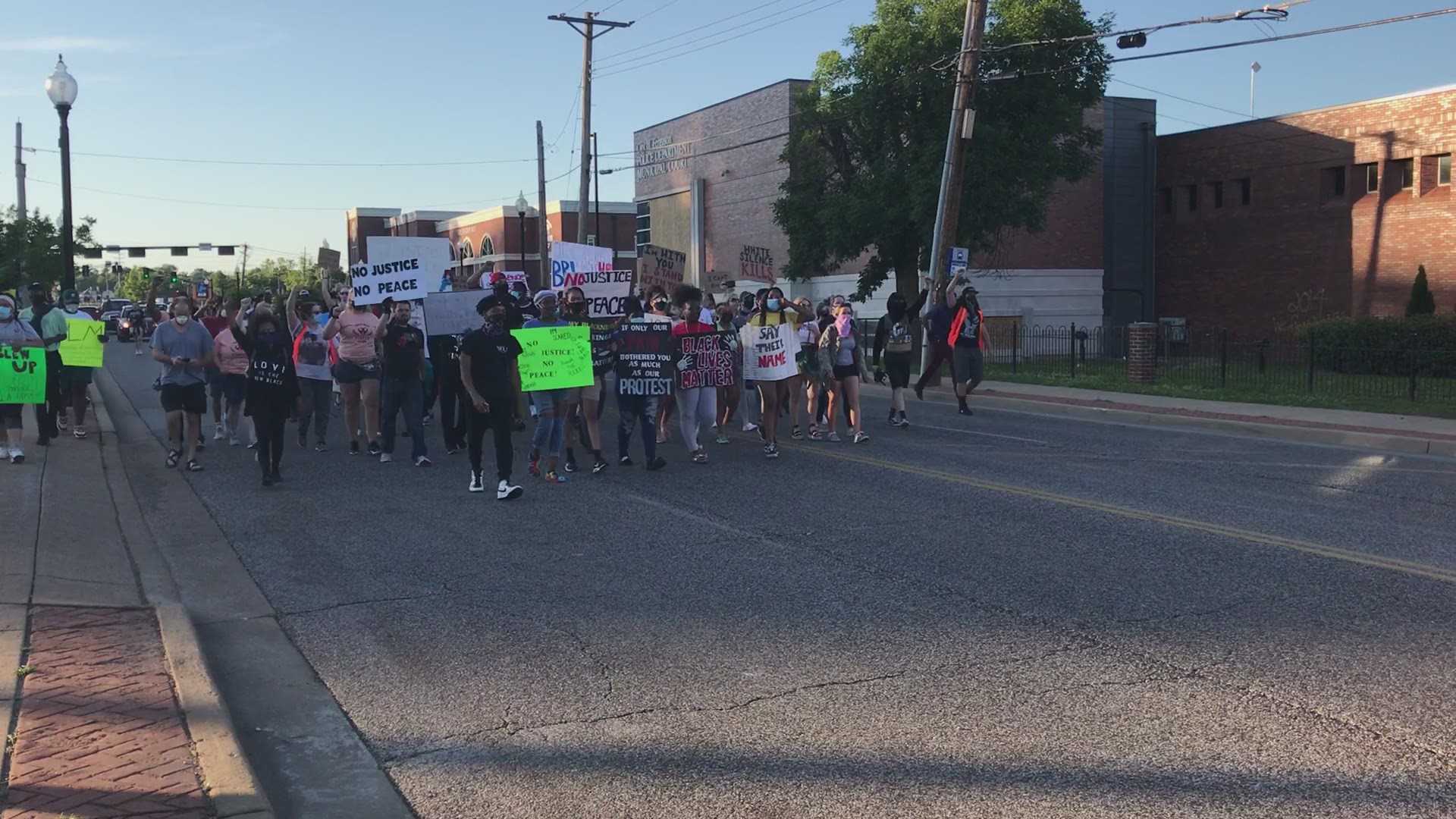 As the city’s 8 p.m. curfew passed Sunday evening, protesters remained on and along South Florissant Road near the Ferguson police station, but the crowd remained peaceful.

At around 8:30 p.m. protesters knelt in front of a line of police officers on the Ferguson Police Department parking lot. The officers were wearing helmets and holding shields.

Sunday’s protests come a day after protests around the St. Louis area ended in Ferguson late Saturday and into Sunday.

Protests throughout the day remained mostly peaceful until around 10:30, when the mood shifted.

Ferguson Police Chief Jason Armstrong that the protests were mostly peaceful and even most of the officers were having positive conversations with protestors — including some children,  before a smaller group of people turned violent injuring several officers — smashing windows and trying to set fire to businesses.

RELATED: ‘It can’t stay like this, it just can’t’; Ferguson protests turn violent with reports of shots fired, rocks and fireworks thrown at police

Mayor James Knowles III declared a state of emergency for the city of Ferguson Sunday evening, including a curfew that will run from 8 Sunday night until 5:30 Monday morning, expanding hours for the city’s second curfew in as many days.

Pulling from the city charter, the order states — in part — “all persons shall remove themselves to and remain in the places of their residence, remain off and away from public streets, sidewalks, parks and all other public or open places; and no person shall loiter or gather together in groups at any place for any purpose whatsoever.”

At around 11:40 Saturday night, Knowles issued a midnight curfew for the city, which was ignored by many protesters.

The protests are in response to the killing of George Floyd Monday night. Derek Chauvin, The officer who pressed his knee onto Floyd’s neck for several minutes, was charged with third-degree murder Friday. The other three officers who were on the scene at the time have not been charged. All four were fired from the Minneapolis Police Department Wednesday.

Protest have erupted across the country and around the world.

RELATED: Violent protests over police killings rage on in dozens of US cities

Sun May 31 , 2020
CLOSE Hundreds protest Sunday in Springfield following the death of George Floyd. Springfield News-Leader With a superhero mask covering most of her face and hands held high, 6-year-old Isis Vault helped her father put together the signs they brought to a protest Sunday. One listed the names of black people who’ve […]