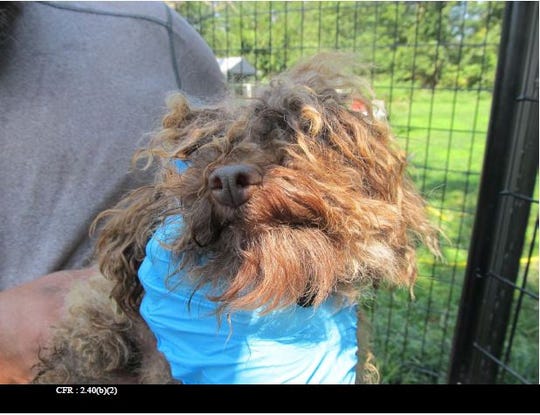 A Missouri puppy mill owner in Elkland was cited twice in late 2019 for animal care violations by the USDA. In September, inspectors documented a brown poodle who was severely matted with an oozing lesion. This was one of 30 Missouri puppy mills in the Humane Society’s “Horrible Hundred” annual report released May 11, 2020. (Photo: Courtesy Humane Society of the United States)

It’s the eighth year in a row Missouri was found to have the most puppy mills and puppy brokers where the Humane Society and government regulators have documented animal care violations.

Missouri is home to 30 dog-breeding facilities that the Humane Society of the United States finds “problematic.” The runner-up state, Ohio, has just nine puppy mills on the list.

“There’s a couple of ways to look at this,” said John Goodwin, senior director of the Humane Society’s Stop Puppy Mills project, in a call from suburban Washington, D.C.

“There’s a couple of ways to look at this. On one hand, Missouri simply does have more puppy mills than any other state,” Goodwin said.”

According to the Humane Society, Cedar Ridge Australians in Oregon County and Puppy Love Kennel in Elkland (which also does business as Cory’s Cuties) were both found with dogs living in poor conditions, some of them too thin. The Cedar Ridge case is pending, while on March 11 the Cory’s Cutie’s owner was fined $5,500 on a judge’s order.

However, most of the Cory’s Cuties fine was suspended so long as the facility keeps from committing “any violations which are found to pose a substantial ongoing risk to the health and welfare of animals under custody” for two years. If a violation is found by regulators, the facility has a week to “cure” it, online court records show.

In the meantime, both Missouri facilities still advertise puppies for sale on their websites.

A third facility, Cornerstone Farms, was subject to a restraining order after the Missouri attorney general filed suit against the Pike County operation in late February, according to a news release from the attorney general’s office. It was previously presented in the Humane Society’s “Horrible Hundred,” according to the current edition of the report.

The Pike County News reported that Cornerstone was fined $9,500, with $9,000 of the fine suspended if the owners followed a strict list of conditions including that they not buy any dogs or cats for the purpose of adoption or resale for at least eight years.

Meanwhile, said Goodwin with the Humane Society, take a look at nearby Arkansas. The Natural State has just one facility on the “Horrible Hundred” list.

“That doesn’t necessarily mean that Arkansas is doing a better job,” Goodwin said. In Arkansas, animal care violations are enforced only by the federal government. Without a state inspection system, there’s simply less enforcement than in Missouri, Goodwin said.

Thus, lawsuits like the Missouri ones wouldn’t be filed. Arkansas would rely on federal enforcement from the USDA.

COVID-19 COVERAGE: Here’s the list of Park Board facilities that are ready to reopen — and those that aren’t

And for the Humane Society, that’s an issue.

“We’re seeing a real decline in enforcement actions by the USDA,” Goodwin told the News-Leader. Of the 100 puppy mills in the Humane Society report, 53 are allowed by the USDA to sell puppies to pet stores, according to the report. 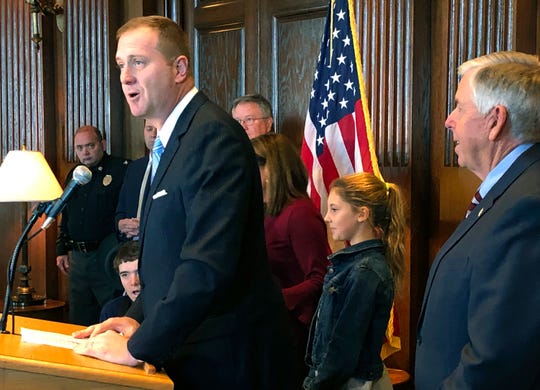 Missouri Attorney General Eric Schmitt’s office said Schmitt has made animal care a significant focus of attention since his appointment in 2018. Multiple suits are in progress, following a steady stream referrals from the Missouri Department of Agriculture, which must be made before a suit can be filed.

Spokesperson Chris Nuelle told the News-Leader Monday, “Since taking office, we have made it a top priority to address substandard and non-compliant breeders and have filed multiple Animal Care Facilities Act lawsuits. We’ll continue to work with the Missouri Department of Agriculture to ensure that Missouri’s breeders are operating within the law.”

In a news release, the Humane Society said Missouri puppy mills’ problems, many of them repeat violations, include kennels caked in feces; sick and underweight puppies and injured dogs who had not received veterinary care; puppies who died from Parvovirus without receiving documented, adequate care; and dogs living in facilities infested with rats and ticks.

MORE: Family’s deaf and blind dog vanishes into the woods near Fellows Lake

Humane Society also noted that many enforcement efforts have been “forced to pause” due to the current public-health crisis.

Goodwin reminded would-be dog owners that adopting or rescuing a pup is best. Families interested in a new puppy from a breeder should meet the breeder, meet the mother dog and see where the mother dog lives.

He advises people to avoid pet stores or buying dogs over the internet, sight unseen.

How The Expectations Of Distance Learning Compare To Kansas City's Pandemic Reality | KCUR 89.3

Mon May 11 , 2020
[ad_1] Mackenzie Martin is an associate producer for KCUR’s Central Standard. Reach out to her at mackenzie@kcur.org or on Twitter @_macmartin. See stories by Mackenzie Martin [ad_2] Source link