It’s been years since I’ve written an obituary. This is the first I’ve ever written in advance.

Our printing press at the News-Leader, Gannett’s $23 million investment not only in the paper but in this community, will work its magic and wonder for the final time 9 p.m. Sunday.

The press was the best in the business when it launched June 3, 2002; without breaking a sweat, it could handle 80 pages of color and 10 sections and 75,000 copies in an hour.

When I took the job here in 2012, I told my wife I would have job security; Gannett will never close the News-Leader because of that incredible press.

Well, the News-Leader is not closing. But the press is.

Sunday night, it will print 12,500 copies of Monday’s paper and no more.

More Pokin Around: It’s best to not stick to letter of the law; homeless men find shelter

The News-Leader is not going out of business. Each morning’s paper will, instead, be printed on a press in Columbia and then trucked to Springfield. I will still have a job, as will my newsroom colleagues and others in the building.

But 41 others will not — including the remaining nine pressmen and those who work in what’s called the mailroom, where people bundle papers and insert advertising.

My son worked in the mailroom for a while. It’s a tough, low-paying job without benefits that, nevertheless, has been a lifeline for people who have worked there for decades.

The man given the task 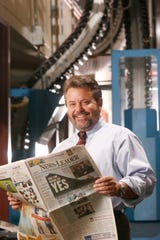 Sunday night will be tough for Tom Tate, the production manager here at the News-Leader and Gannett’s regional director/general manager for west operations. Tom’s office is here in the building.

“It is certainly going to be emotional when that press stops on Sunday night,” says Tom Tate. “It has so much more to give.”

The closure of this amazing machine — only 18 years old — is a business decision.

GateHouse has a paper and a printing press in Columbia and, I might add, a lot of debt.

“It’s business,” Tate says. “We were acquired by another company with assets in this area.”

It was Tate’s job years ago to oversee the project of, first, building the press hall you see today and, second, installing this 600-ton machine that, in a way, has told so many stories.

Maybe it once told the tale of your wedding anniversary? Or your son’s walk-off home run?

At the time, Gannett had recently purchased two other similar MAN Roland presses for papers in Des Moines and Rochester, Minnesota. Both those presses — older than the one here in Springfield — are still in operation today.

“We had the benefit of asking what they would have done differently,” Tate tells me. “They wished they had more color capacity.”

Our press is 75 feet long and five stories tall. It is rooted deep in the Ozarks, literally. It is built on tons of concrete and pillars that were driven into Ozark bedrock.

It has five towers and each somehow operates as its own individual press. I cannot begin to tell you how that works.

Tate tells me he was in Amsterdam with other Gannett executives when he first saw a sketched version of what the Springfield press would look like; someone drew it on a napkin in a bar.

I ask Tate if he was nervous about the scope of the project handed him.

“I was amped up for it,” he says. “But there was a time when I was really stressed about how I can communicate all of this information to various audiences so everybody can understand it.”

He tells me his predecessor in the job of production manager, Jim Eddins, had left him a Bible. Tate says he flipped it open seeking divine guidance.

“I kid you not,” he says. “It opened to that book that everybody knows so well, Habakkuk.”

The verse read: “And the Lord answered me, and said, Write the vision, and make it plain upon tables that he may run that readeth it.”

Tate says he compiled two tables, or charts, that showed all aspects of News-Leader operations, including revenue. One reflected operation if the paper had stayed with its existing press, a letterpress made in 1963, and the other with the MAN Roland press.

Projects of this magnitude involve contracts, which tend to build in contingencies for unexpected acts, sometimes called acts of God.

“The biggest thing we could not account for was 9-11,” Tate says.

The press was delivered in separate parts by ships that crossed the ocean and unloaded in New York harbor.

Fortunately, ground already was broken for the press hall in January 2001 — eight months before the terrorist attacks.

“If we had not been as far along as we were, I think the company would have canceled the project,” Tate says.

The night of the launch will live with Tate forever.

Corporate executives were present in the brand new press hall on June 2, 2002.

More Pokin Around: What would Jesus do? I imagine it would look pretty much like Christie Love

It was a Sunday. The last run will be on a Sunday, as well.

“It is really a juxtaposition — the day we launched and the day we will shut down,” he says. “All the faces of the people here in 2002 were filled with excitement and exuberance.

“We knew we were headed for better days. We got everything we asked for in that press, and it has served us well for so many years.”

“Gannett Co. Inc. chose its newspaper in Springfield to be the new home for this state-of-the-art press because it sees a bright future for Springfield and the News-Leader.

“You don’t spend time, money and technology on a project of this magnitude unless you believe in a place. But the Ozarks is truly a place worth believing in.”

The Springfield press has consistently been No. 1 among the over 100 Gannett dailies in terms of the print quality of the newspaper.

In this business, there are so many things to worry about — such as getting the paper to your door. But no one here ever had to worry about the print quality of this newspaper.

“The magic that started that night when we launched was carried by all of our employees for all of these years,” Tate says. “It was the greatest group of employees that a manager and director could ever hope to lead.” 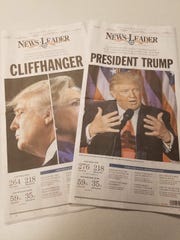 This was a “Stop the presses!” moment. (Photo: submitted by Tom Tate)

No, Tate says. The press never failed to answer the bell in printing the daily paper.

The News-Leader has never used Plan B, which would be to have the paper printed on the Joplin Globe’s press.

Over the past 18 years, Tate says, there was one special early edition and two “Stop the Presses!” moments.

The early edition was when U.S. forces captured Saddam Hussein.

“We were one of only a few newspapers in the country to say ‘President Trump,'” Tate says.

If you add it all up, Robert Zimmerman, 62, has worked 50 years for the News-Leader.

That includes his paper route at 12. He was an adult carrier — a job in which he made the most money in his life when he delivered 2,200 Sunday papers and 1,200 papers the other six days of the week.

He also drove a truck delivering papers throughout the Ozarks, worked in the mailroom and was the paper’s district circulation manager, overseeing 32 counties in Missouri and Arkansas.

He has been a pressman seven years. 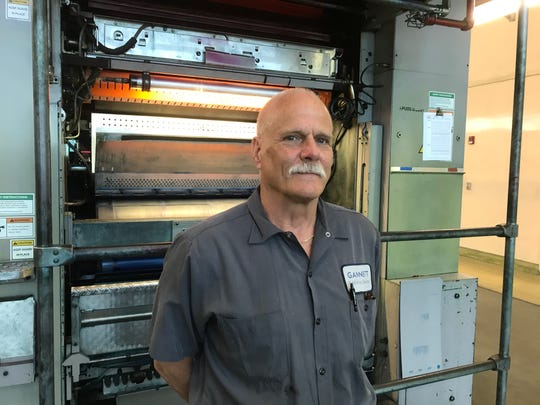 Sunday night will be emotional.

“This job defines us,” he says.

“It is surreal. I am still in shock. I cry a lot. I’m an emotional person. I wanted to work another five years. I’m 62; I need insurance. Most all of us are struggling with insurance.”

He is not going to Columbia to work and he does not believe any of the other pressmen are doing so, either. He has received a severance package.

“I am just trying to get to the end — Sunday night,” he tells me. “I have no idea what I’m going to do after this.”

These are the views of News-Leader columnist Steve Pokin, who has been at the paper eight years, and over his career has covered everything from courts and cops to features and fitness. He can be reached at 836-1253, spokin@gannett.com, on Twitter @stevepokinNL or by mail at 651 Boonville Ave., Springfield, MO 65806.

Fri Mar 27 , 2020
WENTZVILLE, Mo. — An employee at the Wentzville Post Office has tested positive for coronavirus, the U.S. Postal Service confirmed with 5 On Your Side. The USPS said it is working to get in touch with the appropriate health department officials and will follow whatever guidance they provide. “We believe […]