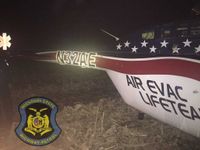 RANDOLPH COUNTY- A helicopter had to make an emergency landing on Wednesday, according to Missouri State Highway Patrol Troop B.

Trp. B is on the scene of a incident involving a Staff For Life helicopter. The aircraft was forced to make an emergency landing northwest of Clark. No one was injured and the helicopter sustained minor damage. Another helicopter responded to the scene to continue the transport. pic.twitter.com/BcWYGAwaA1

The Staff for Life helicopter was headed from Kirksville to Columbia to transport a patient around 6:40 p.m., said superintendent of Randolph County ambulance district Clay Joyner. The helicopter started to have mechanical issues and made an emergency landing.

The helicopter landed in a field near Highway 63.

Four passengers were on board at the time of the landing, including one patient.

Troop B said no one was injured. They also said the helicopter’s landing gear is broken and the tail is bent.&nbsp;

Another helicopter from MU Health went to the scene to continue transporting the patient. The patient is in stable condition.&nbsp;

The helicopter will stay in the field until officials from the Federal Aviation Administration and National Transportation Safety Board can investigate, according to KTVO. NTSB is reportedly investigating on Thursday morning.

KTVO reported that an off-duty MSHP dispatcher happened to be in the area and saw the helicopter come in for a landing. He ran out to the field to assist.

According to the FAA database, the helicopter is just over 40 years old.

KOMU 8 is on the scene and will continue to update this story.

Wed Mar 4 , 2020
ST. LOUIS — Blues fans know more than most how much of a supportive community the hockey family is. We saw it firsthand when teams across the league and fans across North America came together to support Jay Bouwmeester following his cardiac episode during a game. It’s in that same […]