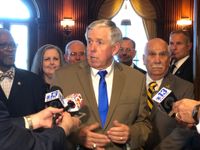 The Republican governor on Monday announced the appointments of of Sen. Shalonn &ldquo;Kiki&rdquo; Curls to the state Labor and Industrial Relations Commission and Sen. Jason Holsman to the Missouri Public Service Commission.

Both senators were prohibited by term limits from seeking re-election this year and would have to resign from office if confirmed by the Senate for their new jobs. Senators earn a salary of about $36,000 annually. Their new positions both have salaries of around $109,000 annually.

Holsman would fill a vacancy created by the resignation of Public Service Commissioner Daniel Hall, who had had been on the five-person panel since 2013. Holsman’s term would expire on Sept. 27, 2025.

Curls would replace Curtis Chick Jr. as the employee representative on the three-person Labor and Industrial Relations Commission, which hears appeals of administrative decisions in workers’ injury and unemployment cases. Chick has been on the panel since 2011. Curls’ term would run through June 27, but she could continue to serve after that, according to the governor’s office.

Curls and Holsman both acknowledged their nominations during Monday’s Senate session. Curls described it as &ldquo;bittersweet,” saying she has loved her time in the Senate but is appreciative of the new opportunity. Both also served in the House, starting in 2007, before winning election to the Senate.

Their departures would leave Republicans with a 24-8 advantage over Democrats in the Missouri Senate.

Missouri governors have a long history of appointing term-limited lawmakers to regulatory commissions, which allows them to continue in government service at a more lucrative scale.

Tue Jan 14 , 2020
ST. LOUIS COUNTY, Mo. — A toddler is expected to survive after being shot in St. Louis County Monday night. Police responded to the 10100 block of Duke Drive around 8:35 p.m. An 18-month-old boy was found with a gunshot wound. He was rushed to a hospital for life-saving treatment. […]