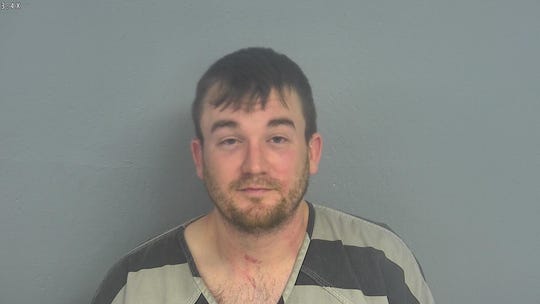 Police say a Springfield man stabbed his neighbor with a knife about an hour into the new year.

According to a probable cause statement, Springfield police were dispatched to an apartment complex in the 1700 block of West Erie Street earlyÂ Wednesday morning for reports of a stabbing.

The statement says police found a man covered in blood at one of the apartments. He had been stabbed or slashed with a knife on his arm, back and head.

The victim allegedly told police his neighbor, later identified as Thomas Leach, had knocked on the victim’s door at about 1 a.m., then yelled at the victim and stepped inside the victim’s apartment.

The victim said he pushed Leach out of his apartment and then briefly fought with him in the hallway, according to the statement.

The victim told police he eventually let Leach up, and then Leach went inside another apartment, grabbed a large knife and attacked the victim, according to the statement.

Police say the victim was cut several times, but his injuries were not life-threatening.

Leach, 30, was arrested at the scene and he allegedly told one of the officers “I stabbed him with a pretty big butcher knife all the way up to the hilt,” the statement says. At the jail, he was allegedly heard bragging to another inmate about the stabbing.

The statement says Leach told police he was acting in self-defense when he used the knife.

Leach was charged this week with first-degree assault and armed criminal action.

Leach was on probation for domestic assault at the time of this incident. Prosecutors wrote in court filings that he is an “increasingly violent individual.”

Leach is being held in the Greene County Jail without bond and does not have an attorney listed for this case. He faces a possible life sentence if convicted.

Fri Jan 3 , 2020
[ad_1] Jefferson City, MO (STL.News) Missouri Secretary of State Jay Ashcroft today announced the top five investment products or schemes likely to trap Missouri’s investors in the New Year and recommended steps they can take to protect themselves from investment fraud. The list was developed by surveying members of the […]